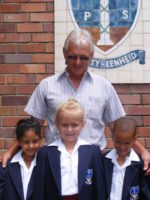 Since Kabega Primary's inception as a parallel medium school in 1963 the school has grown from small beginnings to a school which now boasts a rich culture and pupil numbers which reached 875 in February 2013.

Kabega Primary has been named after the community it serves. The school emblem is the brainchild of Eric Simpson. The badge symbolizes learning, ambition, vitality, growth, hope, wisdom, knowledge and the trinity that exists between the learner, parents and teachers.

This Ad has been viewed 807 times.
Show Private Schools. We show private schools detail from all over South Africa because you need to find the best school for your child. We include the telephone number as well as when available the website link.